PRINCIPLE OF THE METHOD

In many cases, preliminary collection of the biological material under study is performed using cotton or gauze swabs, probes and tips. The biological sample impregnates the "carrier" fibers, which reduces its availability for subsequent exposure to lytic agents. This is particularly problematic when there is a limited quantity of the biomaterial available (for instance, swabs of contact biological traces or traces of biomaterial on fragments of clothing). When DNA is extracted from tissue swabs, a significant part of the biomaterial remains inside the carrier fibers and is unavailable for further research. This effect can be illustrated by measuring the concentration of DNA in the resulting preparations using real-time PCR. No modern DNA extraction kit allows for extraction of all the biomaterial , collected on a cotton swab at once. An additional trace amount of DNA is always extracted from the swab during repeat extraction procedure. 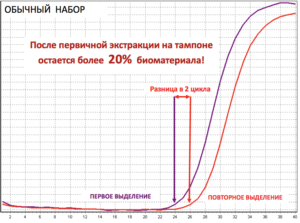 The set of reagents COrDIS "EXTRACT" AUTOMAT is designed to obtain DNA preparations from human biological material for subsequent analysis by polymerase chain reaction, allowing for increased efficiency of biomaterial extraction from the fibers of both natural, and synthetic fabric carriers. 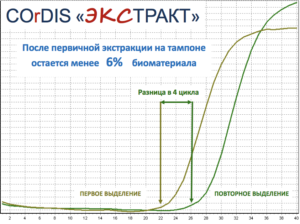 The new EXTRACT lytic buffer allows for at least 4 times more efficient extraction of dried biomaterial, from the fibers of the carrier compared to the widely used foreign counterparts.
High efficiency of primary biomaterial extraction allows for significantly increased efficiency of contact trace analysis, biomaterial swabs from the scene, traces of biomaterials on fragments of clothing, swabs with sperm fraction, extracted using differential lysis protocol.
Further stages of extraction are carried out using DNA sorption on the surface of high-capacity sorbent magnetic granules. The extracted DNA can be used in molecular biological reactions without additional purification.
In addition to the standard extraction protocol, there are specialized protocols for extracting DNA from samples of hair, nails and subungual content, paraffin blocks, mixed samples of epithelial and sperm components.